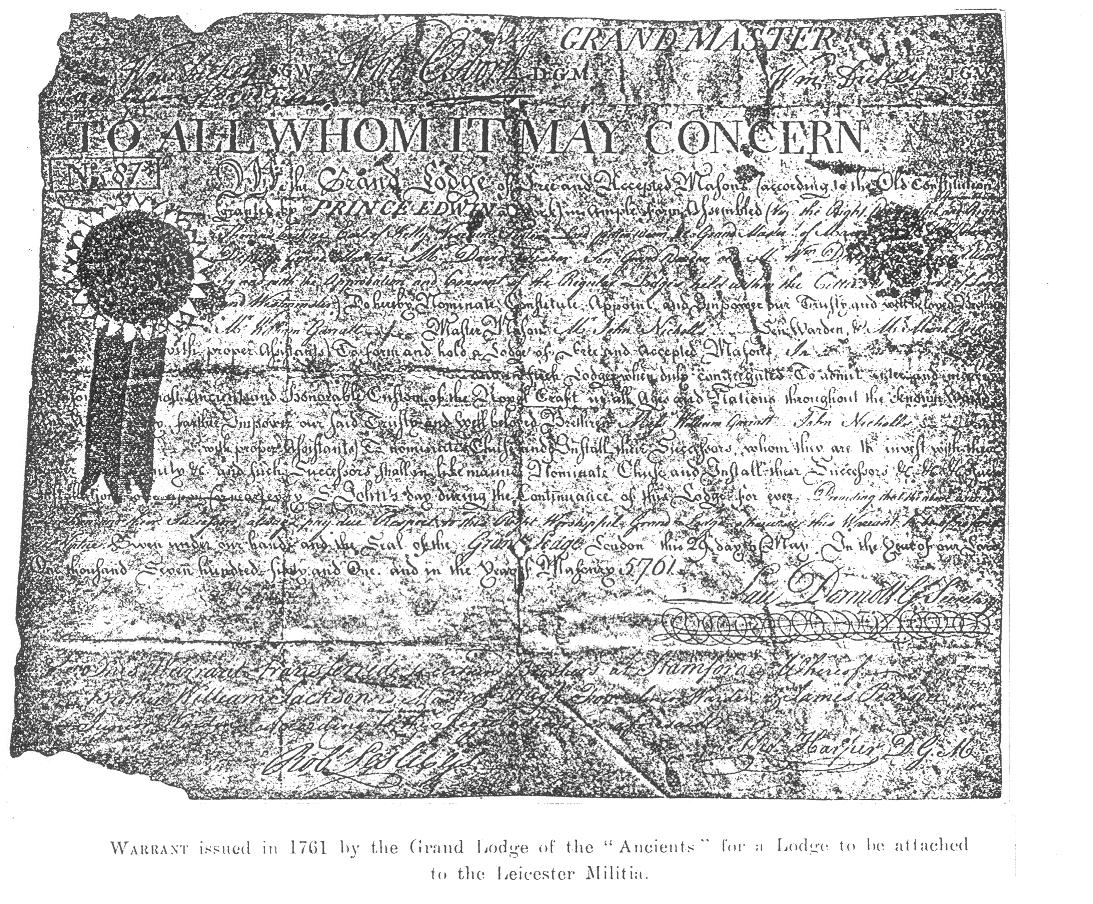 in the abstance of David Fisher.

TO ALL WHOM IT MAY CONCERN.

and in such Lodge when duly congregated To admit, enter, and make Masons according to the most ancient and honourable Custom of the Royal Craft in all Ages and Nations throughout the known World. And We do hereby further Impower our said Trusty and wellbeloved Brethren Mess. William Garratt John Nioholls and Mark Reid (with proper Assistants) To nominate Chuse and Install their Successors, whom they are to invest with their power and Dignity, &c. and such Successors shall in like manner Nominate Chuse and Install their Successors &c &c &c such Installations to be upon (or near) every St. John's day during the Continuance of this Lodge for ever. Providing that the above named Brethren and their successors always pay due Respect to this Right Worshipful Grand Lodge: otherwise this Warrant to be of no force nor Virtue. Given under our hands and the Seal of the Grand Lodge London this 29th day of May in the year of our Lord One Thousand Seven hundred sixty and One. and in the year of Masonry 5761.

This Warrant transferred to certain Brothers at Stamford Whereof Bro. William Jackson is Master, Hugh Fox Senior Warden & James Pearson Junior Warden According to and under the Regulations as foresaid.

On the 29th day of May in 1761, the Leicester Militia became the first Regiment of Militia to hold a travelling Warrant. Warrant No. 87, being issued by the Grand Lodge of the Ancients. The Warrant was transferred in 1803 to the Good Intent Lodge at Stamford which appears to have ceased working a few years later, and was erased in 1827.

A fragment of the original wax seal still adheres to the parchment under the “O" in “No. 87." It probably showed a hand grasping a trowel. The seal on the blue and orange ribbon is the one engraved for Grand Lodge by Kirk, and may have been attached when the Warrant was transferred in 1803 although at that period a later die was generally used. I have added a transcript of the Warrant.

Brother, Lane records that the Lodge “lapsed about 1764." This would be when the Militia stood down with the Seven year War coming to an end. Grand Lodge returns show that 15 brethren were first registered on the 29th May 1761, and two more names added on the 18th September 1764, when the warrant may have been returned and both brethren required to be registered. Only one point of interest remains for us to ponder over, by the names of Brothers Edward Rowley and George Shelton, are the words “Excluded for scandalize behaviour." The mind blushes to what conduct led to this expulsion?

The above data is taken from my paper on the ‘Tigers’ 17th Foot.