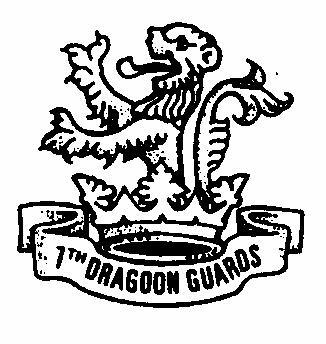 In 1688 five regiments of horse raised by James II marched with the Earl of Devonshire to meet the Princess Anne on her flight from London. On accession she commissioned them for permanent service.

In 1811, the 7th Dragoon Guards were stationed at the Barracks in Great Brook Street, Birmingham. This regiment possessed a Military Lodge under Warrant No.305 issued by the Grand Lodge of Ireland in 1758. During thire stay in Birmingham the members of this Irish Military Lodge initiated at least six Birmingham citizens who were joined by three other Birmingham Brethren in applying to the Antients' Grand Lodge for a Warrant. On the 12th June, Edward Harper, the Deputy Grand Secretary wrote to say that a Warrant would be made out 'as soon as a vacant number can be found'.

The reason for this arrangement was that under a Law made in 1799, prohibiting' secret societies and meetings, although existing Lodges were allowed to continue, the Antients' Grand Lodge thought it doubtful that new Lodges could be legally formed. Therefore, when an existing Lodge ceased to operate, its number became 'vacant', and when a new Lodge was formed it was allotted a vacant number. In effect the old Warrant was re-written for the new Lodge. The number found for the new Birmingham Lodge was No.83, which had previously been issued to a Lodge at Stockport in Cheshire on the 24th June 1760. This Lodge was erased in 1793.

The Warrant of Constitution for the new Lodge in Birmingham was signed and sealed on the 16th July 1811 by Robert Leslie, Grand Secretary.

It was sent to Birmingham together with a Dispensation for John Dowling the Worshipful Master of Lodge No. 305 I.C. to act as Deputy Grand Master for three hours and no longer' and, with the Officers of his Lodge to consecrate the new Birmingham Lodge No.83. This important event took place on the 24th July 1811 when John Thomas was installed as Worshipful Master, with John Nelson as Senior Warden and Samuel Hudson as Junior Warden -all three having been initiated in the 7th Dragoons' Lodge No.305. When the Dragoons left Birmingham in the following month the members of Lodge No.83 had to seek advice on rnasonic matters such as registering the Lodge and its members with the Clerk of the Peace, advertising the Lodge in the newspaper, taking part in processions etc., from the Grand Secretary who, judging from the correspondence, was both courteous and helpful.

The first Regular Meeting of the Lodge was held on the 12th August 1811 after which several of the Brethren joined the other masonic Lodges in Birmingham in commemorating the birthday of the Premier Grand Lodge's Grand Master, the Prince Regent. The first initiate was William Stone who later became Worshipful Master of the Lodge six times between the years 1825 and 1844. His portrait, presented in 1839, hangs behind the Senior Warden's Chair in the Lodge Room at the Severn Street Masonic Hall, Birmingham.

Lodge No.83 appears to have taken the name 'Athol' in the year it was founded. The name is variously spelt Athol', 'Athole’ and ‘Atholl'. The name of the Grand Master is written on the Warrant as 'Atholl' but the original members took the spelling ‘Athol'.

The first meeting place of the Lodge was at the Swan, Great Brook Street, but in the following year it moved to the Cup, Stafford Street, and later met in other taverns until 1859 when the Lodge bought the Severn Street Synagogue and opened it as a Masonic Hall.

After the Union, Athol Lodge changed its number several times until 1863 when it was given the number 74. The reason for it having the second smallest number in the Province of Warwickshire but being the fifth oldest Lodge, is because, at the Union of the two Grand Lodges, the problem of numbering was solved by taking Lodges alternately from the two lists.

Athol Lodge possesses a number of historically valuable documents including a letter from a member of St. Alban's Lodge which played such an important part in Warwickshire Masonry for many years. The letter was written by Bro. J. Newman and dated 29th November 1827. Unhappily, for reasons, which we can only guess about, St. Alban's Lodge fell into bad times and was erased in 3rd June 1829.