A Brief History Of The Antients Grand Lodge 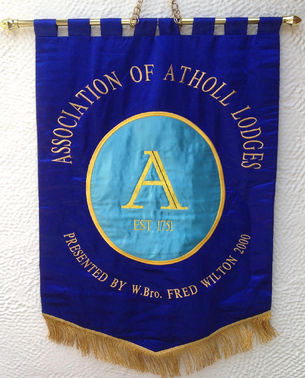 Brethren, it was just over 200 years ago that two rival Grand Lodges came together to form our United Grand Lodge of England. The story of the older of the two, the Premier or Moderns Grand Lodge, is often told; but I would like to talk about the Atholl, or Antients Grand Lodge, who made an equally important contribution to that union.

The Moderns Grand Lodge had been formed in 1717 by just four London lodges, but by 1739 they were listing 175 lodges.

Unfortunately, this growing popularity also encouraged the formation of irregular lodges, and the publication of Exposures that claimed to reveal Freemasonry�s secrets.

So to prevent irregular, or even non-masons, gaining admittance to their lodges the Moderns made a number of changes to their workings.

These changes upset many more traditional Masons; the situation not helped by many leading London Masons being aristocrats or intellectuals, who saw their lodges as just exclusive dining clubs.

In the 1740s the popular interest in Freemasonry waned; and with a Grand Lodge showing little or no leadership, Freemasonry went into a decline.

However, in 1751 came an event that not only revitalised Freemasonry, but also assured its future: the formation of a rival Grand Lodge.

Its founders came from amongst the many itinerant workers seeking employment in Georgian London. Many were artisans and tradesmen from Ireland; some of whom had been initiated in Irish lodges, but found themselves unable to join or form Moderns lodges in London. Their low social standing was certainly one reason for this; but they also wanted to continue practicing the Irish ritual forms, which were akin to the English workings prior to the Moderns� changes.

In July 1751 it was a group predominantly of such unattached Irish Masons, who gathered at the Turk�s Head Tavern in London�s Soho to form the Antients Grand Lodge; with the stated aim of reviving the �Ancient Craft�. Shortly afterwards Laurence Dermott became their Grand Secretary; he was a man of many talents and strong convictions, and under his leadership the Antients flourished. Unfortunately, Dermott could also be tetchy and sarcastic, especially when troubled by gout, and his vitriolic comments would intensify the rivalry between the two Grand Lodges.

The Antients brought to Freemasonry many good men; predominantly artisans, tradesmen, and minor professionals. These were practical men who not only wanted to be part of a venerable institution, but also to have a say in its governance. The Antients were particularly successful in London and the new manufacturing towns: they also had many military lodges, and these helped to carry English Freemasonry to such distant parts as North America, the West Indies and India.

As to ritual; whilst both Grand Lodges recognised the three Craft Degrees, they did favour different practices and workings; and an Antients warrant, unlike one from the Moderns, also entitled their lodges to work the Royal Arch as a 4th Degree. Many Antients Lodges would also work the new Christian orders, such as Knights Templar.

Despite these differences by the early 19th century fraternisation between the rivals was increasing, and many senior Masons were working for a union. There were still major obstacles to overcome, but ways over or around these were found: and in December 1813 the two rivals finally came together to form as a United Grand Lodge, the Antients having 260 active lodges, the Moderns 386. Looking back now it is easy forget how big a change this was; and the debt we owe to the first Grand Master, the Duke of Sussex, for his firm leadership.

The Atholl Association was formed in 1990 to champion the too often overlooked Antients� legacy. There are 122 still working Atholl lodges; 107 in England, 5 in the Channel Islands, two each in Wales, Gibraltar, Bermuda and Jamaica, and one each in Barbados and Guyana: plus there are many other English lodges, and indeed overseas grand lodges, with historic ties to the Antients.

However, the Antients� legacy is much more than those distinguished lodges; indeed without them Freemasonry, as we know it, might never have come about. The Antients were much more democratic in their governance than the Moderns, and were a major influence on our administration and charities. After the Union the ritual forms adopted were largely those the Antients had championed; without them would the Royal Arch have its present status? Whilst outside of the Craft they helped popularise many of the additional Degrees & Orders still worked today.

Brethren, the Atholl lodges were once described as a necklace of sparkling diamonds stretching around the world; happily many of those diamonds are still in place today, and they have lost none of their lustre.